"TECHNOLOGICAL ADVANCEMENTS IN SOME INSTANCES BEYOND THE R and D STAGE OF DEVELOPMENT!"

Well, here you have it. The future is NOW! NOT absolutely so but close to it. The type of stuff you might see in the Skynet scenario!

"Russians Usher in New Era of Warfare with Battle Bots" 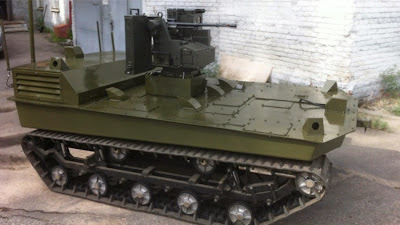 Battle bots the mission of which is to guard Russian ICBM installations. Basically a tankette minus turret and crew. Firing that 12.7 mm [.50 caliber] machine gun.
"Russian military officials announced today that machine gun wielding 'battle bots' have entered the final stage of testing, ushering in a dangerous new era of warfare. While initial plans for the 'Terminator-like' death robots are initially slated to guard intercontinental missile sites as early as 2020, military experts predict we could see non-human infantry as a primary weapon to be used in ground assaults and defense in the not too distant future."

"In April of last year Russia's Strategic Missile Forces reported that silo protecting robots will carry a 12.7-mm machine gun and can fire continuously for 10 hours interrupted, with the potential to fight for up to a week straight without maintenance or reloading. With a speed of 45 kilometers (close to 28 miles) per hour and no fatigue factor to compensate for, the weapon could prove to be the most formidable assault weapon in the history of mankind."

These combat vehicles are autonomous, semi-autonomous or merely remotely controlled or combinations thereof none of this is mentioned.

Like I said, the future is NOW to a certain extent and is likely to become even more so!