Classify this as being in the strange but true category.

The chassis of a Soviet era T-34 tank and the jet engines of a MiG-21 aircraft combined to create a fire-fighting vehicle of some awesome capability.

"This Tank Has Jet Engines and Fights Fires" 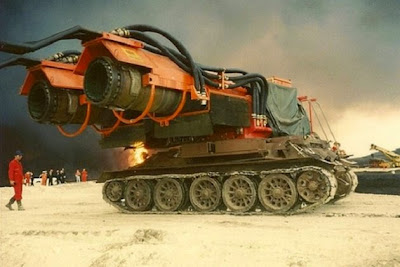 "Here’s your proof that sometimes being just a little bit crazy results in something amazing. This is a working fire truck. It is made from a WWII-era Russian T34 tank. Strapped to that tank’s roof are the engines from a MiG-21 fighter jet. They call this Frankenstein creation Big Wind, and it’s a wonder to see it in action."


"Big Wind works by shooting water through six hoses that are mounted around the jet engines and will shoot out 8,000 gallons of water per minute. This would be impressive in its own right. Turn on the jet engines with their 27,000 pounds of thrust each, and all that water is now shooting out at 770 MPH. Of late, they’ve been using it to once again put out oil fires in commercial oil fields."

Is intended to be used primarily in fighting fires in "commercial oil fields". That applicability in fighting a forest fire I might find to be questionable [see the You Tube video]. Able to work in rough terrain where accessibility to other vehicles is questionable that much we can reasonably infer. Big Wind does need an external source of water.

That T-34 tank as was originally designed in 1934 [hence the designation T-34], that MiG-21 a Cold War combat aircraft

Fighting a forest fire about as close as you can get to actual military combat without having an adversary shooting at you. Big Wind another indication of the quasi-military status and mission of forest fire fighting units.