The Great Wall of Saudi.

Thanks to the Telegraph and Freeper for the article and tip:

"Middle Eastern Kingdom building 600-mile [1,000 kilometers] wall and ditch along its border with Iraq in effort to insulate itself from the chaos engulfing its neighbours." 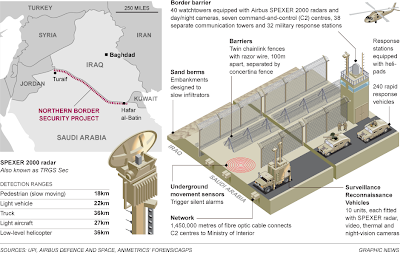 A multi-faceted and layered defense. It would not surprise me if the Israeli is advising the Saudi on this barrier and the design possibilities.

"When a raiding party from Islamic State of Iraq and the Levant attacked a Saudi border post last week, it was no mere hit on a desert outpost."

"The Saudis are building a 600-mile-long [1,000 kilometer] 'Great Wall' - a combined fence and ditch - to separates the country from Iraq to the north."

Say what you will about this. The Great Wall of China. The Maginot Line. Etc.

Or the sand and earthen berm that exists and has existed for some time now between what used to be Spanish Sahara and Algeria. Or the 4,000 kilometer fence that now is in place between India and Bangladesh.

NOT necessarily designed as should be understand to STOP intruders and raiders. Merely to slow the bad guy down, expend energy, take casualties, and allow for rapid reaction forces to deploy and do so with authority and assurance!

And will this fence be visible with the unaided eye from outer space? Another one of those massive and overwhelming in scale human projects built from time to time. ONLY an astronaut can say for sure.