Among the various types of weapons as used by NVA/VC sapper units during the Vietnam War the shaped-charge grenade.

A WEAPON STILL IN USE AMONG THE INSURGENTS IN IRAQ. I MIGHT IMAGINE TOO THIS GRENADE USED BY ISIL ALSO?

"RKG-3 is the designation of Russian series of anti-tank hand grenades." 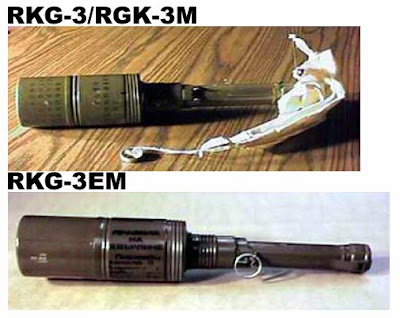 Crude but effective. And very well suited for the low-intensity type of warfare as practiced by the partisan.

"RKG stands for Ruchnaya Kumulyativnaya Granata (Handheld Shaped Charge Grenade). When the pin is pulled and the grenade is thrown a four-panelled drogue parachute is deployed by a spring. This parachute stabilizes the grenade in flight and ensures that the grenade strikes the target at a 90 degree angle, maximising the effect of the shaped charge."

For some time not in the Soviet/Russian arsenal "but many other countries and guerrilla movements are still using the RKG-3 . . . . RKG-3 grenades have also been used by Iraqi insurgents against coalition forces.

"RKG-3 grenades have been used throughout Iraq with the majority of attacks occurring in the Baghdad region."

"RKG-3s have also been used in Samarra, Iraq against 101st Airborne, 25th Infantry, and 3rd Infantry soldiers in MRAPS and Humvees."

Little weapon can do big damage!