In a historical sense the insurgency of Boko Haram not existing in a vacuum.

From two hundred years ago we have the Sokoto Caliphate.

The leader at that time Usman dan Fodio! Islamic religious scholar of some repute and also exercising temporal rule and control too!

Again, FROM TWO HUNDRED YEARS AGO! And as an inspiration to the present jihadists of Boko!

"Shaihu Usman dan Fodio . . . was a religious teacher, writer and Islamic promoter, and the founder of the Sokoto Caliphate. Dan Fodio was one of a class of urbanized ethnic Fulani living in the Hausa States in what is today northern Nigeria."

Usman dan Fodio was proclaimed Amir al-Muminin or Commander of the Faithful in Gudu. This made him a political as well as religious leader, giving him the authority to declare and pursue a jihad, raise an army and become its commander. 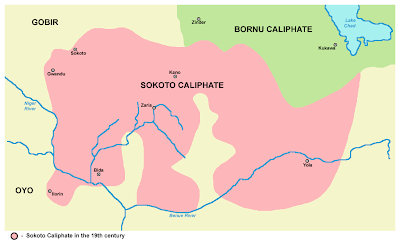 The Bornu and Sokoto Caliphate as they were constituted during the time of Dan Fodio. Bornu and the Lake Chad area a hotbed of current Boko Haram activity! Lake Chad in the upper right hand corner of the image. 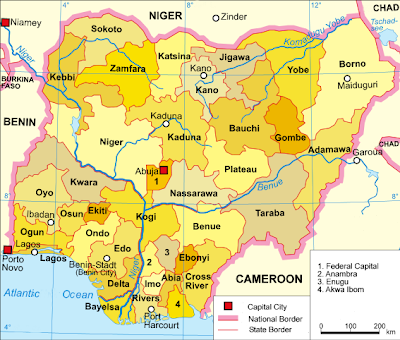 This much larger image of modern Nigeria the area of Borno and the upper northeast corner of the nation that center of Boko insurgency. Boko as is ISIL a trans-national movement a return to the Caliphate of Dan Fodio preferred!

Those borders and political boundary lines of Nigeria, Niger, Cameroon, Chad, etc., as drawn by the western colonial powers [England and France] immaterial to the jihadists. The forces of Boko prefer a return to the old ways and the older territories as subject to Shariah law.