Before there was Truman there was Roosevelt [Theodore].

“Never in my life have I had such a diverting day nor so much enjoyment in so few hours.”- - TR.

From the wiki this assertion is made:

"On 21 November 1946 President Harry S. Truman became the first American President to travel on a submarine when he visited U-2513. The sub went 440 feet (130 m) below the surface with the President on board, and a demonstration was made to him of the German schnorchel (a specialized submarine snorkel)."

President Theodore Roosevelt have boarded [1905] the USS Plunger, inspected and was present during demonstration dives decades before Harry Truman made his "historic" visit to the German U-2513.

"The following morning, Plunger charged her batteries and made a series of five short dives before returning alongside Apache to recharge. Later that afternoon, Roosevelt boarded the Plunger and stayed aboard for almost two hours while she made another series of dives before returning to moor alongside the tug. Roosevelt spent almost another hour on board the submarine before he left." 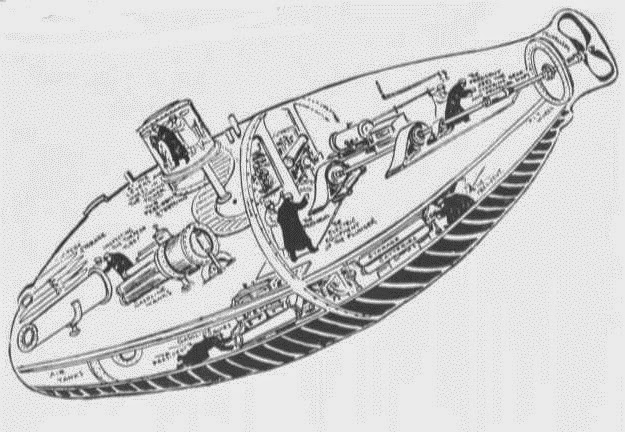 This is the USS Plunger [SS-2] on the inside? Submarines of this era actually quite dangerous. TR was indeed taking a big risk with his visit and voyage on the Plunger.

"'I [TR] myself am both amused and interested as to what you say about the interest excited about my trip in the Plunger. I went down in it chiefly because I did not like to have the officers and enlisted men think I wanted them to try things I was reluctant to try myself.'"

"The demonstration included diving to a depth of forty feet and remaining submerged for half an hour while the President examined the boat."

That captured German U-Boat with the German office Erich Topp at the helm. The safety of an American President as guaranteed by a German officer of much fame from World War Two!

That voyage of TR made without fanfare or it even seems the approval of the Navy Department what it was called at the time. Typical TR!