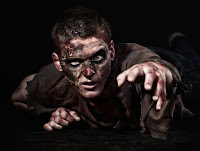 Place this in the strange but true category. Or is it the paranormal?

"Only One Country Ready to Survive a Zombie Apocalypse, According to Scientists"

You the devoted reader to the blog need to go and read it all!

"Brazilian mathematicians considering humanity's chances of surviving a zombie uprising have calculated that to have any sort of shot, civilians would need help from a fairly large standing army. Their estimates led them to a surprising conclusion."

Soldiers as opposed to persons who merely know how to use a firearm. Soldiers functioning as part of a team, according to a plan, and comporting themselves according to and accepting discipline.

Zombies of course a creation of fictional literature but as speculated about rabies with mutant virus thought to be a possible, illness of a fatal sort spreading from animals to humans. YES!

The very same people who will say professional wrestling is rigged and phony, or that no such person as Tarzan ever existed will also say zombies are a product of a fevered and overwrought imagination. Until it is too late!

This is all nonsense. Isn't it? Isn't it?