One picture worth a thousand words? Judge for yourself. 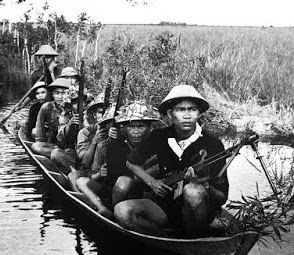 Again that image from a previous blog entry. Viet Cong [VC] patrol wearing the conventional insurgent uniform from that period. To include the pith-style helmet. 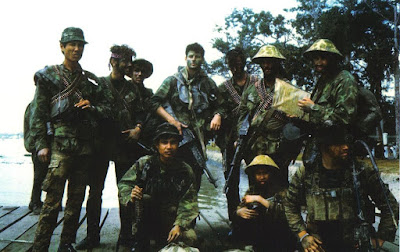 Here also an image of a mixed unit, U.S. Navy SEAL and friendly Vietnamese military personnel during the Second Indo-China war. Several American SEAL wearing the Viet-Cong pith style helmet! Especially during hours of darkness such disguise can be vital to special operations missions? Allows operators to close with the enemy in a relatively undetected and advantageous manner.

Wearing those VC helmets constitutes "wearing the uniform of the enemy"? This is a violation of the Laws of Land Warfare? Or is merely a ruse or stratagem of war valid and legal? This I do not know!