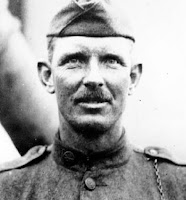 The legacy of Alvin York still strong one-hundred years later. Alvin the go-to man even in the aftermath of the war.

"Legacy of Tennessee's greatest war hero may be education"

That article by: Jake Lowary, The (Nashville) Tennessean via the AP"

"PALL MALL, Tenn. — Until he was old enough to buy and trade his own comic books, Gerald York  [Col. USA Ret.] thought his grandfather was just an ordinary man."

"Alvin C. York — Tennessee’s most famed war hero and among the most recognized Americans from World War I — was 'always jovial, always fun.'”

"Today, his name is known worldwide and is emblazoned across the state."

You need to read it all. Alvin hardly "an ordinary man" and the rest of the family even for generations. also hardly "ordinary".

The family of York stands tall!