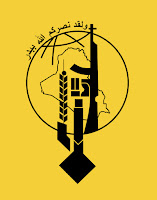 From the War is Boring Internet web site some further info - - the topic of which is the various Iraqi Shia militia:

"Dangerous Shia groups came back ... in a big way"

2. "Before They Attacked the Kurds, Shia Militias Undermined the Campaign for Mosul"

"Pro-Iran groups have taken aim at Kurdish and Western forces"

Units of Shia militia possessing an unmistakable religious zeal. A willingness to sacrifice themselves for the cause, having implacable hatred for the adversary.

SACRIFICE THEMSELVES  EVEN IF USED AS A PROXY FOR A FOREIGN POWER!!

See previous blog entries as most germane to the Iraqi Shia militia and the seizure of Kirkuk: