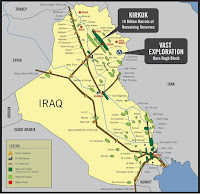 Bad goes to worse and then some? Could even have been anticipated!

Thanks to Freeper and the original article at Breitbart.

"amok 1 :in a violently raging, wild, or uncontrolled manner. 2 in a murderously frenzied state."

Iraq possessing the second [??] largest proven oil reserves in the world. Oil fields around Kirkuk important but not so absolutely critical to Iraqi petroleum production?

Atrocity as perpetrated by Iraqi Shia  militia if indeed occurring only exacerbating a very tense and difficult situation. Anyone have an answer?