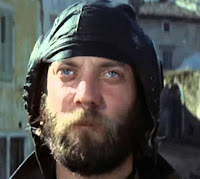 Here yet with one more instance of Hollywood personalities involved in "business" with an actual military dimension.

"Left Behind: Cinematic Revisions of the Vietnam POW"

"Starting in 1979 and continuing into the early 1980's, POW films would revisit Vietnam and the POW image in super-hero rescue films."

Super-hero rescue films. Such as might have been Lara Croft as played in the cinema by Angelina Jolie!

"One military officer attempted to find out first hand if POWs remained. In 1982, Special Forces Colonel James 'Bo' Gritz organized a search and rescue team with donated money from Clint Eastwood and William Shatner among others, to go into Laos. Eastwood wanted the movies rights if the mission proved successful."

MISSION TO LOCATE OR RECOVER AND REPATRIATE AMERICAN PRISONER-OF-WAR IN SOUTHEAST ASIA UNSUCCESSFUL. BUT THE IDEA AND INTENTION AND FINANCING WERE THERE!!