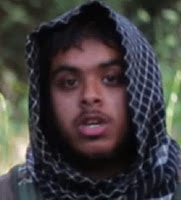 Still continuing with extracts and commentary from the latest edition of the DEBKAfile news letter.

As has been previously observed, the Islamic State their fighting units greatly bolstered by the particpation of foreign nationals from a whole host of countries around the world. True believers their belief now apparently sorely tested.

"The Soufan Center, a US-based think tank, says 33 states have reported about 5,600 Islamic State fighters have returned home in the past two years. Data recovered from Raqqa and other ISIS centers which have fallen in Syria and Iraq have helped confirm the identities of 19,000 of the more than 40,000 foreign fighters from 110 countries estimated to have flocked to the jihadist flag in Iraq and Syria."

ALSO DO NOT FORGET THE PRESENCE OF WIVES AND CHILDREN OF THE FOREIGN FIGHTERS TOO. A HARD BED HAS BEEN MADE AND NOW IT MUST BE SLEPT ON.

Draconian and summary measures to be taken against those foreign nationals that have fought for the Islamic State cause? Their future grim indeed! See previous blog entry regarding this matter: