A WEAPON WITHOUT A TARGET?

From the New York Post and also thanks to Freeper for the tip:

"South Korea is prepared to use non-lethal graphite bombs — also known as 'blackout bombs' — to short-circuit the North’s electrical grid in the event of a nuclear war, according to a report."

PROBLEM WITH ALL THIS IS THAT NORTH KOREA DOES NOT HAVE A ELECTRICAL GRID TO SPEAK OF IN THE MODERN SENSE!! 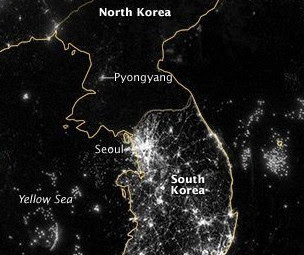 The famous image of the Korean peninsula as taken from a satellite during hours of darkness. Very striking the contrast. South Korea [ROK] a well-lit industrialized and highly urbanized modern society. North Korea almost totally devoid of any man-made illumination other than the capital city of Pyongyang. The South [ROK] prosperous and developed. The North [DPRK] backward, feudal, primitive. On one side of the demarcation line [DMZ] light, on the other side darkness. Literally and figuratively!! Incidentally those blotches of light on the right side middle of the image a commercial fleet fishing for squid!