"When weak appear strong and when strong appear weak!"

From the English Sun. Kim of North Korea continues his antics.

"Commandoes [sic] march across the Kim Il Sung Square during a military parade on Saturday, April 15, 2017, in Pyongyang, North Korea to celebrate the 105th birth anniversary of Kim Il Sung" 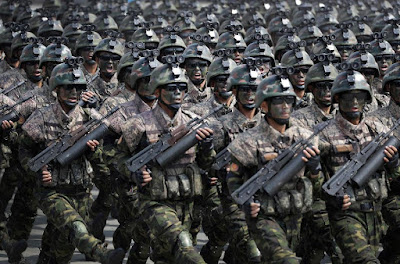 Image purportedly of North Korean special operations troops goose-stepping during a parade. I had thought those were some sort of grenade launcher of unknown type attached to the snub-nosed folding-stock AK. But NO that is a helical magazine of dubious performance. The wearing of the American-style helmet with night-vision goggles, gloves and sunglasses also seems to mimic in a surprising way the current battle dress of American troops. Thanks for the image courtesy: (AP Photo/Wong Maye-E).

"Some of the most memorable images to emerge from North Korea’s dramatic parade featured the special operations 'commandos' who were carrying what appeared to be AK-47’s with grenade-launching capabilities. It turns out that what many people believed to be grenade launchers are actually what's known as 'helical' magazines, a piece of equipment that organizes rounds in a spiral shape to maximize capacity and that is notorious for jamming"

AND YES THE CORRECT SPELLING OF COMMANDO IN PLURAL IS COMMANDOS!