From the History.Net Internet web site herewith an aspect of the American Revolutionary War I was 100 % totally unfamiliar with. I recommend highly this article portions of which as extracted for your perusal to all devoted readers of the blog without qualification or reservation.

France as is well known aiding and abetting the cause of the American colonialists. Spain I was not aware also in league with the Thirteen Colonies in rebellion against the English..

"The Spanish circumvented the British navy’s Eastern Seaboard blockade, using the Mississippi River to supply the colonial rebels. It was up to Gálvez to keep that line open"

"Over the next two years, Gálvez would lead thousands of Spanish soldiers and scores of ships against the British in what would prove to be the last combat theater of the Revolution. Enduring hurricanes, disease, and difficult, swampy terrain, he and his soldiers forced the British to divert scarce resources and played a little-known but crucial role in pressuring Great Britain to negotiate for peace after seven grueling years of war." 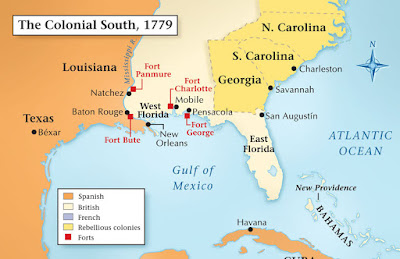 2. This also. Coalition forces rarely if ever fight well. That combat force as commanded by Galvez an exception to the rule perhaps unique??

"Gálvez had assembled a force of remarkable diversity for the 18th century. The initial troop of more than 600 men comprised 170 veteran soldiers, 330 recruits from Mexico and the Canary Islands, 60 militiamen and local citizens, 80 free blacks, and 7 American volunteers, including Oliver Pollock. Gálvez recruited another 600 men among Louisiana’s German and Acadian immigrants, and 160 Indians. The babel of languages can only be imagined: West African, German, Acadian French, probably Choctaw or Chickasaw, and the Castilian of the Mexicans, Cubans, and peninsular Spaniards, with the Irish lilt of the bilingual Pollock."

The motley crew if there ever was one but nonetheless effective. Mission as accomplished! Superior command leadership ability undoubtedly a major contributing factor.

"A motley crew is an informal expression for a roughly organized assembly of individuals of various backgrounds, appearance, and character. Typical examples of motley crews are pirates, college fraternities, Western posses, rag-tag mercenary bands, freedom fighters, and IT support teams."