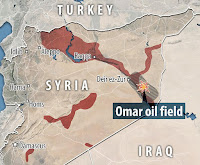 Once again from the latest edition of the DEBKAfile news letter.

Loss at Kirkuk is gain at Omar?

"US-backed Syrian Kurdish militias reported Sunday, Oct. 22, the capture of Syria's biggest oil field of al-Omar in the eastern Deir Ez-Zour province. The Kurds' takeover pre-empted its grab by the Syrian army and Hizballah, who were still 6 km short of al-Omar."

"It now turns out that the Russian command's secret order to the Syrian/Hizballah forces . . . to halt where they stood after capturing Mayadin in eastern Syria from ISIS - and not advance on the oil field - was prompted by unpublished talks between US and Russian officers in the area."

"The officers reached a deal on the disposition of these oil fields. Under that deal, it was decided to award the Syrian Kurdish YPG militia the richest Syrian field as a prize for its role in leading the SDF in the capture of ISIS' de facto capital of Raqqa."