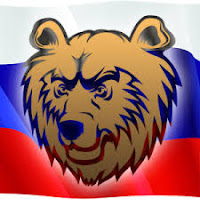 More extracts with some commentary as from the J.R. Mooneyham Internet web site. In this particular case the future of Russia as a world-power the topic.

"2025 milestone: The core remnant of the original Russia is becoming an important international player again"

* "The 21st century rebirth of the Russian state is regarded by some as the greatest achievement yet of certain global Vigilante/virtual state factions, aided with widespread support from a substantial portion of Russian citizens."

* "Most all observers agree that the sudden influx of free or very low cost network computers and cheap Internet access via pizza-size satellite dishes was instrumental to the state's reorganization."

* "This reinvigorating of Russia began in small pockets throughout the country and spread from there."

* "Some of the brightest spots in Russia now include its entertainment industry."

* "Russia is considered in the present to be at least number two or three among high quality global cyber war forces."

* "Russia's cyber war expertise also proves a boon to further expansion and improvements to the embryonic virtual states online, as both Russia and surviving Israeli cyber war experts help support and protect many net servers from discovery, seizure, and regulation by the old world geopolitical establishment, both for financial and non-financial ones."

* "Russian medical technology is now considered state-of-the-art in many ways, and in high demand worldwide."

* "One particularly desirable feature of certain Russian medical products is 'guaranteed' protection from several common biological weapons agents-- as well as a dozen or so less scary but common health threats, too."

* "Russia also found success in other highly individualistic markets as well, such as home security, environment, and power generation."

* "Though still somewhat embryonic, Russia also has a promising new modular housing industry ramping up to meet demand mostly in the still developing nations (as well as Russia itself)."

THAT YEAR 2025 NOW APPROACHING AND THE RUSSIAN HAS ONCE MORE BECOME A WORLD-POWER AND "WORLD-PLAYER" OF SOME IMPORTANCE!

Ask yourself too, how much of what J.R. has seen as the future for Russian has become reality.