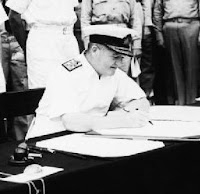 Only very vaguely was I familiar with this. Units of the British Empire military as detailed for the invasion of Japan if and when such an eventuality was to occur.

The Commonwealth Corps. Military force of empire, ground force contingents of what was often referred to as the white dominions.

"The Commonwealth Corps was the name given to a proposed British Commonwealth army formation, which was scheduled to take part in the planned Allied invasion of Japan in during 1945 and 1946. The corps was never formed, however, as the Japanese surrender obviated any need for it. Under the proposals the corps would have comprised Australian, British, Canadian and New Zealand forces."

Restrictions and requirements as were foreseen by the planners to include:

* "use only US equipment and logistics"

See previous blog entries the topic of which was the British contribution to the war in the Pacific proposed and otherwise:

That British Pacific Fleet in 1945 the largest and most powerful British naval contingent ever to sail. And performing yeoman duty during the battle for Okinawa.