“ISIS fighters have dressed up as woman and caked their faces in makeup in a bid to avoid being caught by Iraqi authorities after losing their stronghold in Mosul.”

Warning! If you are easily disturbed by images of an intense, adult, outrageous and frankly macabre nature do not open the link below from the Daily Mail but hit escape now! You have been warned!

Thanks to the story from Canada Free Press as seen again originally at the Daily Mail:.

"Jihadi Johns crossing over to Jihadi Janes to escape Mosul"

Transgender has been a major topic in the news recently. But this is too much!!

"Welcome to the Brave New World where girls can no longer be girls or boys, boys in a coming society where no one knows who or what they really are in a world where both politicians and popes claim there is no such thing as Islamic terrorism" 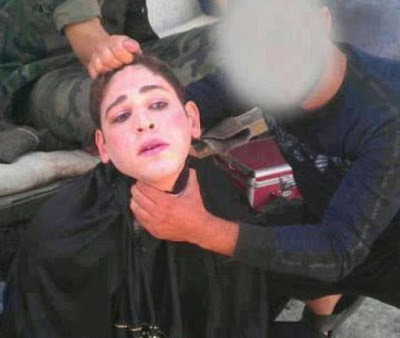 Captured! The most dangerous beast of them all. An ISIL warrior. Beard shaved, hair cut, dressed as a woman in the burka, lots of cosmetics applied to the face. Concealment that did not work. What would Mohammad say? Frankly I have chosen this image because it is the least offensive and controversial of all I have seen.

The more they make an effort to escape detection the more likely to be caught. If you want to hide, hide in the open. Too late now boys/girls.