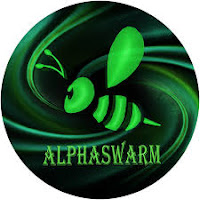 Swarm technology of a sort from that era of the Cold War.

Anti-submarine warfare [ASW] technology a counter to the relative silent running of Soviet diesel/electric submarines. Thanks to the War is Boring Internet web site.

"‘Floppy-magnets’ made enemy subs noisier, easier to hunt—but were too hard to train with"

"A Canadian scientist figured some kind of sticky undersea noisemaker would make a Soviet sub more detectable. He designed a simple hinged cluster of magnets that could attach to a submarine’s metal hull."

"Movement would cause the flopping magnets to bang against the hull like a loose screen door, giving away the sub’s location to anyone listening. The simple devices would take time and effort to remove, thus also impairing the Soviet undersea fleet’s readiness."

Number of these magnets as dropped by American aircraft on a submerged [?] Soviet submarine creating a "clanking" sound easy to detect.

The dropping of such magnets would not be seen as hostile act posing a danger to the submarine?

In conversation with an acknowledged authority in such matters the dropping of the magnets even during a time of peace would not seen as anything other than a hostile act. The submarine captain cannot differentiate between passive [magnets] and active devices [depth charges] and would be within his rights to respond with force if he deemed it necessary.