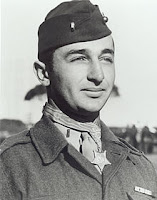 In finality from the isegoria.net web site that continuing series of blog entries, extracts with my commentary.

"One Hill, One Marine"

"As Paige — then a platoon sergeant — and his riflemen set about carefully emplacing their four water-cooled Brownings, it’s unlikely anyone thought they were about to provide the definitive answer to that most desperate of questions: How many able-bodied U.S. Marines does it take to hold a hill against 2,000 desperate and motivated attackers?"

Originally I thought the heroics of Mitchell Paige as during the Battle of the Bloody Ridge [often referred to as Edson's Ridge]. This combat action however one month subsequent to Bloody Ridge!

Paige not 100 % alone as you might well assume but a platoon sergeant in charge for thirty men manning four machine guns. Paige the last man standing, all other personnel, KIA or WIA!

"In 1998, Paige served as the model for a G.I. Joe action figure. His was the Marine Corps figure in a series honoring Medal of Honor recipients from each branch of the U.S. military."