From Russian Times and as seen at Freeper some humor and satire I find to be very good, for fun only. Within context of the recent American Presidential election the all-powerful and all-encompassing Russian bear active both in the air and under water!!

"Revealed! Putin personally hacked DNC from surveillance aircraft with bear on board"

"Shocking revelations earlier this week as US intelligence officials confirmed with 'high confidence' that Russian President Vladimir Putin was 'PERSONALLY INVOLVED' in the hacking of the Democratic National Committee....The high level, anonymous and completely trustworthy sources also told a major US news agency that PUTIN HIMSELF PILOTED a specially designed RUSSIAN SPY-PLANE across the Atlantic to personally direct the still-ongoing hacking operations from the air... ...Satellite images seen by a separate anonymous NASA whistle blower are believed to show Putin in the cockpit of the spy plane alongside his co-pilot Boris, A LIFELIKE ROBOTIC BEAR which has been under secret development". 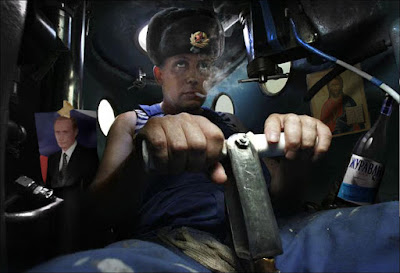 Midget submarines also! Don't forget them. NOT Vladimir Putin at the helm in this image but close-by along with JESUS and the obligatory bottle of vodka. Credit Moosefoot and Militaryphotos.net.

"Shocking revelations" during the holiday season done with mirth and glee. And to be appreciated by all. The Russians are everywhere!