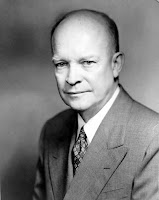 Yet another item as extracted from the isegoria.net Internet web site with my commentary:

"We Will Mock The Brave And Wise"

"Yet the world, and especially the American public, saw Sputnik as a devastating defeat for America. It damaged Eisenhower’s presidency to such a degree that had he been in his first term, the event would have most likely cost him his reelection. It prompted a flurry of legislation that federalized education and scientific research."

OF ALL AMERICAN PRESIDENTS DURING MY LIFETIME WITHOUT QUESTION EISENHOWER THAT ONE MAN MOST PREPARED HOLD THE OFFICE!!

And as for the Soviet now "beating" the American into outer space with the first earth-orbiting satellite, NOW we know the rest of the story and are so much the better for it too!