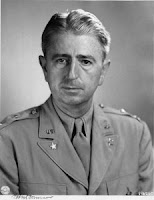 Once again with that continuing series of blog entries, extracts with my commentary as from the isegoria.net Internet web site. That original article by Joseph Fouché.

". . . Major Albert Wedemeyer devised the U.S. Army’s World War II grand strategy, unit structure, equipment requirements, and general concept of operations, all in a period of about three months — before Pearl Harbor and America’s decision to enter the war."

"Wedemeyer was tasked with calculating the nation’s total manufacturing requirements for the coming war, but he realized that his mission was much more complicated than that"

"Apparently no one in Washington had given those questions any thought."

NOT UNTIL THREE MONTHS BEFORE PEARL HARBOR WERE AMERICAN "NATIONAL OBJECTIVES" IN CASE OF GLOBAL WAR FORMULATED AND THAT BY A RELATIVELY MINOR AND JUNIOR OFFICER!

This is the stuff of grand strategy too! Those resources of the nation-state in totality during a time of war in a focused and concentrated manner dedicated to the war effort.

I guess what surprises me most is that the formulation of grand strategy at the highest level was not a mission as entrusted solely to the highest echelons of command, those chief of staffs as they existed at the time. Albert again was a relatively junior officer, albeit quite capable.