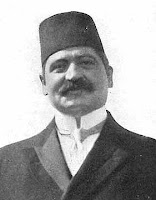 This blog entry too can raise hackles in some quarters!!

"The most well-known of many fabrications on the Armenian Question are the famous 'Talat (Pasha) Telegrams,' in which the Ottoman interior minister and other officials supposedly telegraphed instructions to murder the Armenians. These conclusively have been proven to be forgeries"

"Forgeries are too common in history to be considered impossible. Referring to writer Gwynne Dyer, Dadrian says that 'the British eventually ignored the document.' They chose to ignore it while they were searching the whole Ottoman archives for a single reliable document to be used against Turkish leadership and moreover reaching to other archives in search for similar material"

The Armenian Question. Massacre of the Armenians during the Great War [WW1] ] as part of a PLANNED GENOCIDAL CAMPAIGN the subject at question here. THE OTTOMAN WAS GUILTY AND THE DOCUMENT THAT PROVES IT HAS BEEN FOUND?

THE ENGLISH IN THE AFTERMATH OF WW1 FOR A FULL YEAR SEARCHING FOR THE "SMOKING GUN", THAT INCRIMINATING EVIDENCE TO BE FOUND IN THE OTTOMAN ARCHIVES SOUGHT BUT NONE FOUND!

Historians adhering to the Rankeian school of historiography in mind do indeed have a hard time!