Once more from the Chicago Tribune today we have the story of the SeaFox.

Currently deployed and being used in the Strait of Hormuz.

A drone for naval use.

A submersible the mission of which is to locate and destroy enemy sea mines.

Unattended but still tethered to a "mother ship", a fiber-optic link providing a view, commands, etc. 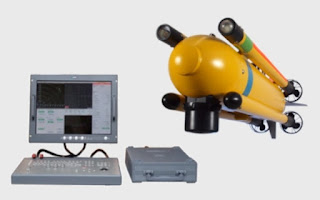 SeaFox is referred to as an underwater unmanned vehicle [UUV] and is considered to be EXPENDABLE!!

"Only about 90 pounds a 4 feet long, the unmanned but remotely guided submersible carries a TV camera, homing sonar and an explosive charge for what amounts to a kamikaze mission."

"When it detects a mine, the undersea craft obliterate itself as well as the mine."

I hope these SeaFox are cheap!!

Presumably these are sea mines anchored to the bottom of the sea, more like a torpedo than a conventional mine, activated and placed into the seek mode when the presence of a vessel detected [as might have been done to the South Korean vessel recently sunk].

"The device [SeaFox] is controlled by a 3,000 foot fiber-optic cable and sends live video back to a camera operator. It operates at a depth of about 1,000 feet and moves up to 6.9mph."

"can be deployed from minesweepers or other ships, as well as from helicopters and small boats, augmenting the Navy's anti-mine capabilities."

I would have to think that the SeaFox on of those main capabilities of the Littoral Combat Ship [LCS]?

Unmanned submersibles are the "wave" of the future?

Bandwidth is a problem? Hard to transmit so much pertinent data by sound waves underwater. That is why a tether to a fiber-optic cable is provided in the case of SeaFox.

Within the civilian sector the use of such unmanned submersibles is not new. These SeaFox can be deployed from a variety of "platforms" and are very versatile. That method of destroying a naval mine [or a land mine for that matter] rather than merely rendering the mine inactive is the current accepted and most widely used method?

At one time, this mission of mine detection and destruction was designated as an "animal" thing? Porpoise, seal, pilot whale trained to detect and destroy with explosives enemy sea mines. That use of animals now forbidden perhaps. Intelligent creatures used in such a manner an affront to us all?

SeaFox today, what tomorrow? Naval warfare being revolutionized as we speak.