For your edification and thanks to the wiki some amplification on that area of the South China Sea  claimed by China as irrevocably SOVEREIGN TERRITORY AND NOT SUBJECT TO NEGOTIATION!!

"Nine-dash . . . nine-dotted line . . . or nine-dash map . . . Nine division lines of the South China Sea . . . Vietnamese: 'ox's tongue line' refers to the demarcation line used by the government of the People's Republic of China for its claim in the South China Sea" 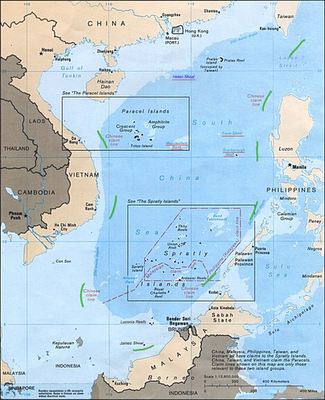 That line [see the nine green lines] of demarcation and the area within very closely if not almost exactly comporting to the two hundred meter [600 feet] depth.

Overlapping claims for this area of the South China Sea existing with China, Philippines, Brunei, Vietnam, Malaysia. The Chinese too have a plethora of historical evidence and anecdotal accounts to suggest that for several thousands of years there has been a Chinese deep water presence in the South China Sea making claims valid if not indisputable!

South China Sea is hot now and will be hotter in the future? Too hot we hope not for.