Here with the full dope [?] on the next combat UAV to be fielded by American forces.

Predator C already the plane having flown and joining the inventory by 2015, only several years away.

That UAV first ONLY surveillance and reconnaissance [recce] weapons being added ad hoc as an afterthought [Predator A], that Reaper [Predator B] a more robust combat UAV, that recce drone now a combat warplane, ROBUST!

The next stage being right now, the Predator C, called the "Avenger", a turbo-fan [jet] with stealth capability, weaponry more inclusive and lethal. A combat warplane with a capability to do damage way beyond the "A" version as originally envisioned.

"The General Atomics Avenger (formerly Predator C) is a developmental unmanned combat air vehicle . . . the Avenger is powered by a turbofan engine, and its design includes stealth features such as internal weapons storage, and an S-shaped exhaust for reduced heat and radar signature." 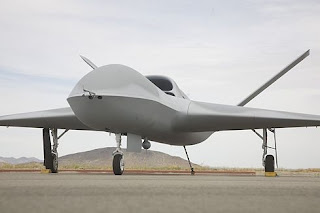 A variety of weapons carried per mission, ORDNANCE CARRIED INTERNALLY AND NOT HUNG FROM OUTSIDE THE AIRCRAFT CLEAN FOR BOTH STEALTH AND AERODYNAMICS!

Weaponry and armament as carried by the Avenger to include:

Hellfire missile, the various laser guided bombs of the Paveway family [GBU-31/32/38] and JDAMS munitions as guided to target by GPS.

Stealth capability A MUST for the future of UAV?

The adversary as encountered on the battlefield of Afghan that is so often the target of Predator A and B NOT able to counter in even the slightest manner the high-flying drones.

That will not always be the case in the future and appropriate measures have been incorporated into the design criteria of Avenger to mitigate any possible counter-measures present or future.