"Have Reaper will travel!"

Here from a defense web site we have the full dope on the Reaper UAV.

Taking a toll of the terrorist and Taliban insurgent in Afghan and now deployed world-wide it would seem.

The Reaper is an advanced and much more robust version of the Predator.

Reaper is actually the Predator B version that original Predator referred to now as the "A" model.

"Reaper able to carry up to fourteen Hellfire missiles compared to the two maximum as carried by the Predator A."

Reaper having inboard, middle and outboard stations from which weaponry can be mounted.

Reaper a COMBAT UAV FROM THE GET GO THAT PREDATOR "A" HAVING MISSILES FITTED ALMOST AS AN AFTER THOUGHT, SURVEILLANCE ALONE THE ORIGINAL INTENT OF THE UAV [Predator A].

That original Hellfire missile now in the more advanced II version, warheads to include:

[That original Hellfire only having a HEAT warhead anti-tank?]

Reaper also able to mount laser guided guided bombs of considerable potency, mounted on the inboard positions that lethality of the UAV much magnified. 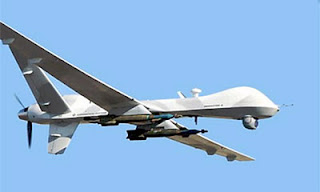 Here a Reaper is armed with two laser guided bombs.

These laser guided bombs part of the Paveway [Laser Guided Bombs (LGB)] family to include:

Reaper! Can do! Don't leave home without one!