Oncer more from the National Geographic Internet web site we have an extract concerning the military sketch artist from the time of the American Civil War. The sketch and observations as published in the English press, the American Federal forces in the aftermath of the First Battle of Bull Run in pell-mell retreat to the rear, disorganized and without thought, panic stricken troops fleeing in object defeat and shamefully so NO LONGER UNDER COMMAND OF THEIR OFFICERS, UNIT COHESION HAVING TOTALLY DISINTEGRATRED!! 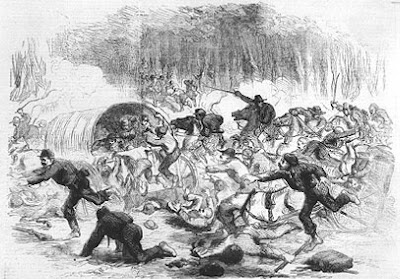 “'The Stampede From Bull Run,' along with this blunt description: 'At half-past five the Federal troops were in full retreat, pursued at different points by the black horse cavalry of Virginia. Retreat is a weak term to use when speaking of this disgraceful rout … The terror-stricken soldiers threw away their arms and accoutrements, herding along like a panic-stricken flock of sheep, with no order whatever in their flight … Wounded men were crushed under the wheels of the heavy, lumbering chariots that dashed down the road at full speed. Light buggies, containing members of Congress, were overturned or dashed to pieces in the horrible confusion of the panic.'” - - Frank Vizetelly.

Retreat, a movement to the rear [retrograde operation] best understood in terms of ORGANIZED [good] or DISORGANIZED [bad]! The Union army at First Bull Run retreating in an disorganized manner, including that contingent of Fire Zouaves, those personnel thought to be least likely to crack and break under pressure!

Must be undestood to be NOT merely superfluous jargon but conveying a specific situation on the ground:

Organzed GOOD, disorganized BAD! For the case of the Union forces at First Bull Run BAD!!

I have always wondered why the ANV didn't pursue, over running and capturing the Federal soldiers and then take Washington, D.C., capturing those Congress men there, the President and ending the war.