From seventy years ago the RAF Kittyhawk combat aircraft of Flight Sergeant Dennis Copping long missing found! Having crash landed in the Egyptian Desert and covered [?] by sand all this time, the war bird now found, more or less in very good condition, intact to a degree seldom found after sustaining war time damage, suitable perhaps for restoration and resuming flight status at some time. The body of Dennis Copping NEVER found, the airman presumed dead, body-not-recovered [BNR]! Thanks to the English DailyMail on-line:

"Frozen in the sands of time: Eerie Second World War RAF fighter plane discovered in the Sahara... 70 years after it crashed in the desert"

"Pilot of the Kittyhawk P-40 was thought to have survived crash, but died trying to walk out of the desert"

"Aircraft was found almost perfectly preserved, unseen and untouched, after it came down in 1942" 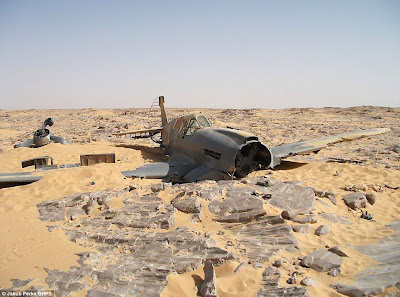 A fly-able P-40 restored and not a replica [replicas do exist?] very expensive, and doubling in value each and every year, so few even exist!

The conditions as found in the Sahara very conducive to preservation? NOT the extremes of moisture, mildew, rot, atmospherics and damage from critters as would be found in other locales? Such must be the case that numerous undiscovered and very well preserved examples of military hardware, aviation and otherwise, must just be out there, waiting to be found and restored!