Thanks again to the English DailyMail on-line the British Royal Navy [RN] answer to the American DDG "Zumwalt" class destroyer - - the D Class destroyer Dauntless proven according to the headline to be NOT so dauntless!


"Stranded and helpless" - - a "Daring" class vessel at that exact moment NOT so daring! 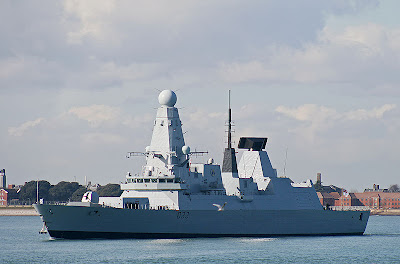 "Bristling with cutting-edge technology and carrying an awesome array of weaponry, the Royal Navy’s new destroyer HMS Dauntless is said to be one of the world’s most sophisticated and powerful warships.
But the £1 billion vessel was left helpless and stranded – when a £10 fuse apparently blew.HMS Dauntless is the second ship of the Type 45 class of air defence destroyer built for the Royal Navy (also known as the Daring or 'D' class)."

Please forgive me but as only a person with a technology degree and NOT a naval architect this D class warship appears to be too top-heavy? I am wrong here? My intuition fails me that this ship DOES NOT look right? 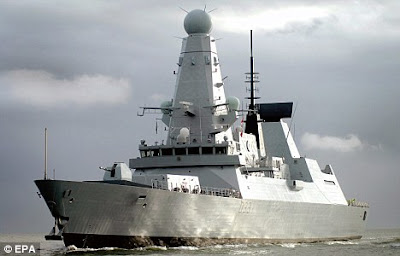 The primary mission of the D class vessels is AIR DEFENSE? So it is stated:

"HMS Dauntless is the second ship of the Type 45 class of air defence destroyer built for the Royal Navy (also known as the Daring or 'D' class)."

Dauntless in contrast to the American DDG class destroyer NOT having a mission of striking targets far inland organic capacity limited in that regard [land attack]!

Dauntless nonetheless carrying "an awesome array of weaponry" to include:

Compared to the cost for one American DDG destroyer the English are getting a good value for their money? That is a billion POUNDS and not dollars apiece per warship, the DDG costing about $7 billion per copy!

That Daily Mail headline too alarms in a way that is misleading? During combat action in the Pacific during World War Two, the American battleship North Dakota lost ALL power an engineering officer having tied down all circuit breakers in a manner unwarranted, disaster nearly occurring! Mistakes such as the ten pound fuse easily remedied proper steps and measures immediately taken, solution found!