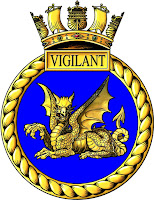 Bars and restaurants! No brothels however!

From the Russian media Sputnik and the article by Evgenia Filimianova.

THE ROYAL NAVY'S FINEST DONE IN BY THE VIRUS!

"The submarine crew reportedly left the vessel to go to bars and restaurants in Georgia, United States, where the Kings Bay US base is located."

Lots of restaurants and bars. Close quarters on the submarine with the confinement the WORST for the spreading of a contagious ailment. Young men stationed on the submarine I would think almost all in excellent health their chances of dying from the corona virus slim to none.

Indeed. Better to keep the crew of a submarine while on patrol uninformed and "in the dark" about a perilous situation [pestilence] ashore? That is ze' French way!