I heard it on the hotline!

"hotline - -  n.  A direct and immediate telephone linkup, especially between heads of government, as for use in a crisis."

From the BBC and thanks to same.

"Turkey and Greece set up military hotline amid energy tensions"

"Turkey and Greece have set up a military hotline to try to reduce the risk of clashes in the Mediterranean, where the two are locked in a row over energy resources and maritime borders."

NATIONS HISTORICALLY GOING TO WAR OVER ACCESS TO OR CONTROL OF  VITAL RESOURCES. 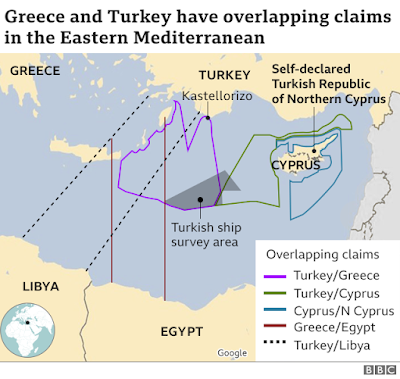 Click on image [image courtesy the BBC] to see an enlarged view. One player missing from the game. Israel. Israel making claims in the are that I believe overlap with Cyprus and Turkey both. Libya and Egypt additionally seeking "a piece of the action"?

See this Internet item the air forces of Greece and Turkey in a most recent "dogfight" a show-of-force muscle display. War games as deemed that almost went way beyond games.

P.S.: Need I say that Greece and Turkey members of NATO?