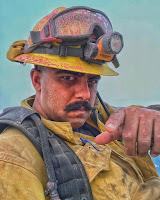 From the Internet web site Black Rifle Coffee and the article by Joshua Skovlund.

FOREST FIRE FIGHTING. THE CLOSEST YOU CAN GET TO WAR  WITHOUT HAVING A HUMAN ADVERSARY SHOOTING AT YOU!!

Devoted readers to the blog will want to watch the embedded video.

"The California wildfires are raging throughout the state, with four of the most recent totaling 119,775 acres burned, according to Cal Fire. With dry conditions and high winds over the week, the wildfires are growing more rapidly than ever."

"Since as early as June, more than 3.7 million acres have burned in California alone, not including the wildfires in Oregon and Washington. There have been 26 associated fatalities and 5,352 structures damaged or destroyed."

Again, fighting one of these forest fires for the men on the ground [and in the air in some instances] as close as you can get to war without having an adversary trying to kill you.

Over three million acres [one and one-half million hectares] burned. That is a lot of landscape and the worst not over yet. The Great fire of 1910 usually the standard by which destructive forest fires measured at that time in one catastrophic event also about three million acres also burned.

See prior blog entries that the quasi-military nature of the forest fighter as understood and appreciated: