Drone carrying a drone. Air-launched drone and then RECOVERABLE.

The parasitic warplane. Nothing of this sort seen in almost seventy years.

Has been proposed many decades during the era of FLIGHT but never found to be feasible.

As seen at The Aviationist web site and thanks to same.

"the expendable sUAS will enable EW/SIGINT (Electronic warfare/SIGnals INTelligence) and ISR (Intelligence, Surveillance, Reconnaissance) missions in a contested environment, which may be challenging for the launcher aircraft that can maintain this way a standoff distance, identifying and reporting on mobile targets while flying also below adverse weather. The new system could allow also swarming tactics with reduced visual and acoustic signature." 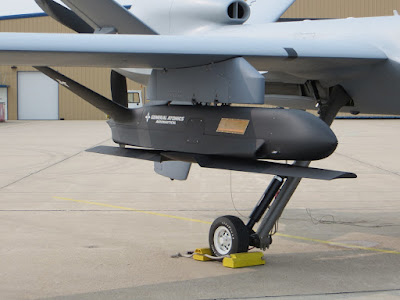 "GA-ASI @GenAtomics_ASI #Sparrowhawk is a recoverable #SUAS that enables EW/SIGINT missions that are challenging from standoff platforms. With AttritableONE technology that is survivable and precise...a true game changer."

Again, a mini-drone both expendable and recoverable? Will be able to dock with the "mother ship" while the UAV in flight?

YOU GO FIRST LITTLE FELLOW. THEN I WILL FOLLOW IF THE COAST IS  CLEAR.