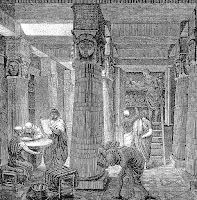 As extracted from an Internet web site atrocity as perpetrated by the conquering army of Alexander the Great of Macedon. More exactly so the burning of Persepolis library folios and archives priceless knowledge from antiquity as lost forever.

"Alexander the Great & the Burning of Persepolis"

"The destruction of Persepolis was an immense loss of the accumulated learning, art, and culture of ancient Persia. The religious works of early Zoroastrianism, written on goat-skin parchment, were destroyed along with artworks, tapestries, and other priceless cultural artifacts. The administrative records of the city, written in cuneiform tablets of clay, were hard-baked by the fire and buried under rubble, surviving to the present day and providing archaeologists with vital information on how the Persian Empire operated and what the people valued. Even so, what was lost in the fire has long been recognized as irreplaceable, and whatever motivated the destruction of Persepolis cannot finally matter."

ALEXANDER NORMALLY THOUGHT AS A LEARNED AND SOPHISTICATED MAN GREATLY APPRECIATING CLASSICAL THOUGHT AS UNDERSTOOD AT THE TIME. THIS OCCASION MACEDONIAN TROOPS DRUNK AND OUT OF CONTROL, NOT RESTRAINED.

Read further the destruction of renowned libraries through military action:

* The Great Library of Alexandria.

* The Great Library of Baghdad.

* The Great Library of Louvain.