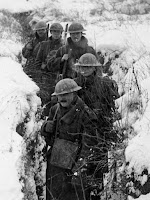 From the American Geophysical Union the article by Anthony Watts and thanks to same.

"WASHINGTON—Scientists have spotted a once-in-a-century climate anomaly during World War I that likely increased mortality during the war and the influenza pandemic in the years that followed."

"Well-documented torrential rains and unusually cold temperatures affected the outcomes of many major battles on the Western Front during the war years of 1914 to 1918. Most notably, the poor conditions played a role in the battles of Verdun and the Somme, during which more than one million soldiers were killed or wounded."

Troops stressed by physical and mental demands without a whole lot of amelioration and exacerbated by harsh cold and damp conditions their immune systems compromised severely. Too susceptible to illness. Pathogens of all sorts present in the trenches and dugouts of the Great War this without questions.

I ALSO HAVE OFTEN WONDERED IF THE CONSTANT AND OFTEN PROLONGED WEARING OF GAS MASKS BY COMBATANTS DURING THE CONFLICT CONTRIBUTED IN SOME MEASURE TO THE SPREADING OF PULMONARY ILLNESS SUCH AS THE SPANISH/SWINE FLU!