China the largest navy? China? Does this surprise anybody?

As extracted from the outstanding Internet web site Strategy Page

"Winning: Chinese Fleet Is The Biggest"

﻿"October 4, 2020: American intel estimates of Chinese naval power believe the Chinese fleet is now larger than the United States fleet of 293 major warships. The U.S. Navy still has a considerable edge in tonnage, manpower, firepower and experience. China plans to close all those gaps by mid-century. China is doing this by building modern ships faster and in larger quantities than the U.S. is capable of. Moreover, the Chinese build them on time and apparently under budget. China also sends those ships to sea frequently in an effort to close the crew skill gap." 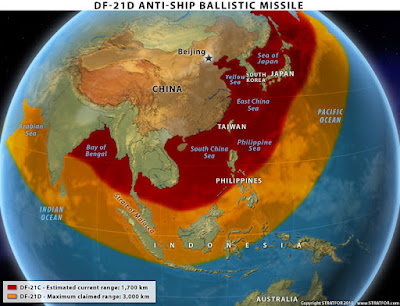 Click on image to see an enlarged view. Area in orange the range of the DF-21. DF-21 even with conventional explosive warhead containing some large amount of bang-stuff a direct hit might even sink an American aircraft carrier. DF-21 additionally mobile.