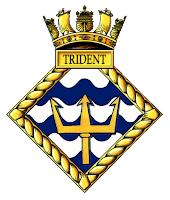 Supposed to be SECRET but no longer? Thanks to the Russian Internet media outlet Russian Times:

"UK is the ‘51st state’? Uproar as Britain’s secret deal to buy nuclear warheads from US without Parliament’s consent is revealed"

"Furious Brits have accused their government of being a lapdog for Washington, after it was inadvertently revealed that the UK had quietly inked a nuclear weapons deal with the US, forgoing public debate."

"The Pentagon recently disclosed that Britain has agreed to purchase new US nuclear warheads to replace Trident, its own homegrown nuclear program. However, the deal came as a surprise to British lawmakers, who were reportedly kept in the dark about the nuclear weapons."

TRIDENT TO THIS POINT THAT BRITISH NUCLEAR WEAPONS SYSTEM THE MISSILE PREVIOUSLY ONLY WHICH AN AMERICAN COMPONENT. SUBMARINE AND WARHEAD OF INDIGENOUS ENGLISH DESIGN AND MANUFACTURE AT LEAST UNTIL NOW. NO LONGER?