Consider an aspect of World War One [WW1] I was not familiar with.

"bar'rage - - n. The act of barring; specifically, the formation of an artificial obstruction in a watercourse, in order to increase the depth of the water, to facilitate irrigation, and for other purposes.  n. The artificial bar thus formed; especially, one of those on the river Nile in Egypt."

"The North Sea Mine Barrage, also known as the Northern Barrage, was a large minefield laid easterly from the Orkney Islands to Norway by the United States Navy (assisted by the Royal Navy) during World War I. The objective was to inhibit the movement of U-boats from bases in Germany to the Atlantic shipping lanes bringing supplies to the British Isles".

"The objective was to prevent U-boats from operating in the North Atlantic and preying on trans-Atlantic shipping. A similar barrage had already been placed across the English Channel, which had resulted in U-boats diverting north around Scotland. The North Sea Mine Barrage was intended to close this alternative route, and it also made it hard for the U-boats to get supplies." 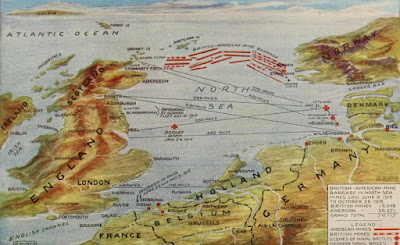 The barrage [gauntlet] as shown with red lines stretching from the Orkney Islands/Scotland to the territorial waters of Norway. Passage through the English channel by a similar minefield denied to the German much earlier in the war. Barrage I would think not a totally impervious obstacle but greatly reducing areas where German U-Boat could operate with impunity. Click on image to see a larger view.