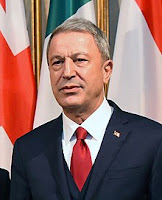 Who are you going to believe? And within context of a most recent blog entry.

"blush - - To become red in the face, especially from modesty, embarrassment, or shame; flush. To feel embarrassed or ashamed."

From the outstanding Internet web site South Front this excerpt:

"According to the March 2 remarks by Defense Minister Hulusi Akar, the number of ‘neutralized’ Syrian troops since the start of Operation Spring Shield reached 2,557. This is approximately 350 Syrian soldiers higher than was claimed on March 1. The main question is: 'Does the Turkish defense minister really believe in the numbers that he provides?' It probably would be useful to not make such claims personally. Thus, he would be able to avoid blushing with shame. If the Syrian Army really suffers such casualties in only a few days, Turkish-led forces would easily achieve their declared goal of expelling Syrian troops of southern and eastern Idlib."

That ONLY instance in the five-thousand year recorded history of warfare where claims of damage and casualties as done to the adversary exceeded by actual results the Japanese kamikaze attacks of World War Two.

Minister Hulusi merely repeating what is reported to him without personal verification. That is normal.