From a previous blog entry regarding the Russian military build-up in Syria:

"U.S. intelligence has observed the possible staging of multiple rocket launch systems [MLRS] at Russian ports, which could be loaded onto ships bound for Syria."

My instantaneouos reaction is that this was a MLRS of the Uragan variety. Long-range rocket artillery of awesome capabiloity. But perhaps this is not so. Thanks to Freeper we have this item thaty might suggest otherwise.

"MOSCOW (Reuters) - International monitors say they have spotted a new kind of Russian weapons system in rebel-held Ukraine this week, possible evidence of Moscow's continued interest in Ukraine even as it focuses on Syria."

"The Organization for Security and Co-operation in Europe, which is monitoring a ceasefire in eastern Ukraine, reported that its monitors had seen a mobile TOS-1 'Buratino' weapons system for the first time."

"TOS-1s were first used in combat in Afghanistan’s Panjshir valley by the Soviet Union. Later, they were prominently used in the Battle of Grozny in 1999 by the Russian Army." 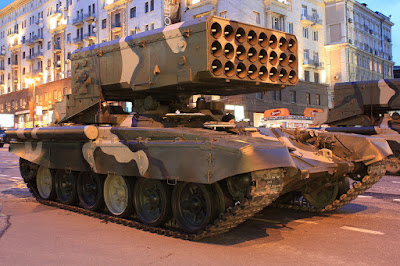 TOS-1 rocket artillery but understood as flame and chemical munitions of the thermobaric type.

"The TOS-1 is not used by the artillery units of the Russian Armed Forces but is found in NBC defense units" "The Buratino is equipped with thermobaric warheads which spread a flammable liquid around a target and then ignite it."

"TOS-1As were first used in combat in Iraq in the recapture of Jurf Al Sakhar on October 24, 2014 from ISIL forces."

Those thermobaric weapons deployed and used en masse can well be considered to be a weapon of mass destruction? Devoted readers to the blog will have to decide for themselves.