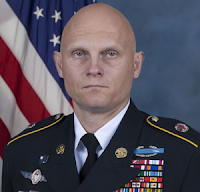 "Raiders of the Lost Ark, in actuality a combined force of American and Kurdish special operations troops again stand tall."

"More details have emerged about the raid against an ISIS prison camp near Hawija, Iraq, where a joint American-Kurdish-Iraqi strike force rescued seventy prisoners who were about to be executed and dumped in mass graves. The most prominent of these details is the identity of the American soldier killed in this daring operation: Delta Force Master Sgt. Joshua Wheeler."

Joshua Wheeler a career soldier of the highest possible training, skill and ability. A highly motivated self-starter with an almost unsurpassed combat record.

The American career military man able to practice his trade, craft and vocation in a manner as not probably been the case since the time of the Roman Empire?

A career military man of the type such as Joshua wheeler. to whom we all should be greatly indebted.