Continuing with the serial, images and commentary as extracted from the EnglishRussia web site. The assault on downtown Grozny going very bad for the Russian. Two months required to secure the city from the Chechen separatists, it estimated that HALF THE RUSSIAN CASUALTIES WERE FROM FRIENDLY FIRE, SELF-INFLICTED LOSSES MOST GALLING!! 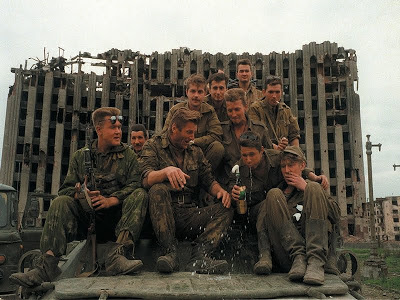 Russian troops finally victorious enjoy some bubbly! That building in the background having been severely damaged perhaps beyond repair. Has sustained damage repeatedly from some big bore direct fire weaponry and been burned inside totally it would seem. An ideal assault might have involved the landing of infantry on the roof from helicopter and had them work downward one floor at a time, top to bottom !! 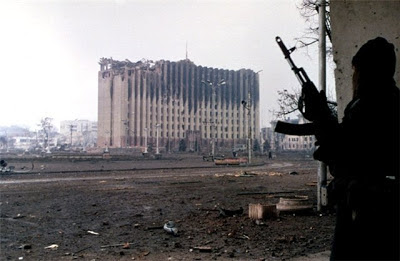 Here from a different aspect is that same damaged multi-story building? That is a Chechen fighter in the shadows. For infantry to attempt an assault across that open area would have been suicidal unless backed up  by big bore weaponry in the direct fire mode. Urban warfare has the drawback that the more firepower used has a bad tendency to create ruins of a worse type making for additional hiding spots and cover for the defender. This structure used to be called the New Ministry and was the headquarters for Dudayev and his separatist movement? 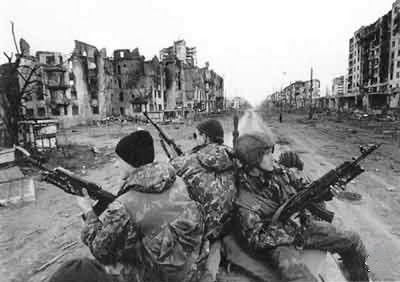 Russian troops riding unbuttoned watching those upper floors of those buildings as they pass by. Beware the Chechen armed with a rocket propelled grenade firing DOWNWARD at the most vulnerable part of an armored vehicle [Russian]. Those troops appear to be armed with AK 74 with attached integral grenade launcher reminiscent of the American M203!  Please note the utter destruction stretching as far off as the eye can see!! 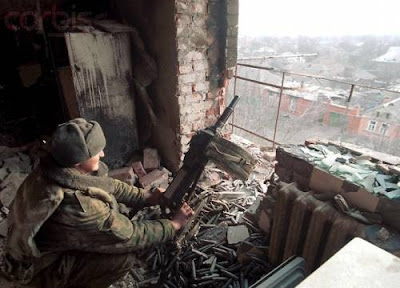 This Russian is firing either an AGS-17 or AGS-30 automatic grenade launcher and doing so in what appears to be indirect fire mode, almost if he has a mini mortar. Lots of rounds already fired and more on the way. 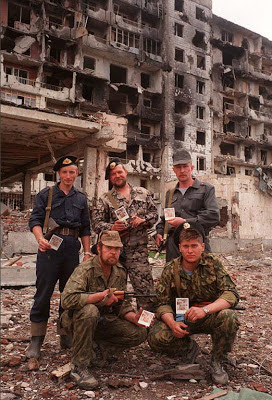 Such an odd assortment of uniforms a melange defying all military conventions. Those three with the black berets are Russian Marines referred to as the "Black Death"? Someone familiar with the flashes can help?

See these additional web sites for more images and photographs of Grozny and the First Chechen War: "GROZNY IN THE WAR AND AFTER IT" AND "VAKHABITS GOT THE POWER"