First with a reprise, a description of a Turkish army corps during withdrawal from the Megiddo battlefield [1918] set upon by British ground attack aircraft. Relentlessly pursued to such an extent by combat warplanes the result an almost complete and utter obliteration, reconstitution as a fighting force in the aftermath deemed impossible:

"On 21 September, the Seventh Army [Turkish] was spotted by aircraft in a defile west of the river. The RAF proceeded to bomb the retreating Turks and destroyed their entire column. Waves of bombing and strafing aircraft passed over the column every three minutes and although the operation had been intended to last for five hours, the Seventh Army was routed in 60 minutes. All transport, artillery and heavy equipment was abandoned or destroyed, many Turks were killed and the survivors were scattered and leaderless."

"When the smoke had cleared it was seen that the organization of the enemy had melted away.  They were a dispersed horde of trembling individuals, hiding for their lives in every fold of the vast hills.  Nor did their commanders ever rally them again."

As it was in 1918 so it was too in 1939. That Polish Army of Poznan withdrawing from the battlefield also attacked by dedicated German ground attack warplanes, the result horrific in the extreme. Thanks to the the warbirdsresourcegroup and the description of H. Molloy Mason Jr.:

". . . the next twenty minutes were like a nightmare in hell. The machine guns cut swaths in the ranks of men and horses; hundreds of light weight scatter bombs flamed and exploded; the heavier detonations of the 110-pounders tore gouts out of the earth, ripped through trees and flung jagged metal shards thudding into men and animals. Even when the last of the various missiles had been delivered, the 123s were not finished with low-level attacks. The pilots discovered that when the BMW engine was pushed to 1800 r.p.m., the resultant effect on the three-bladed, variable pitch airscrew produced an ear-splitting and indescribable sound that was both inside and outside of the man subjected to it. Even hardened soldiers were unnerved, and ran in all directions to escape. Horses simply went insane."

Most surprisingly so [?] that attacking German dedicated ground attack aircraft during the Polish Campaign 1939 a biplane, the Henschel Hs 123. An antiquated [even at the time] warplane originally engineered and designated as a DIVE BOMBER rather used to pursue, bomb and strafe the adversary relentlessly, the low-level attack wreaking damage without respite or surcease, amelioration impossible, that Polish adversary in the aftermath deemed hors de combat [out of action]! 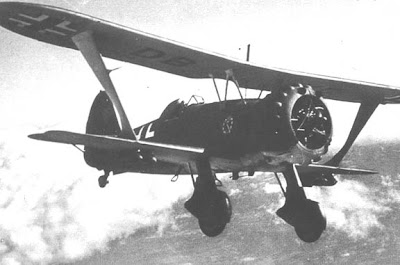 The Hs 123 not adequate as a dive bomber yet employed with success as a ground attack low-level combat warplane, that Luftwaffe during the Second World War [WW2] not always so super-sophisticated as one imagines.

The Hs 123 able to drop bombs and strafe, massed formations especially in the pursuit EFFECTIVE!

That Hs 123 having certain desirable features that made it popular combat aircraft especially on the Eastern Front during WW2, operating easily from unimproved or expedient airfields AND able to take a lot of damage and keep flying, maintained with relative ease!!

"The Hs 123 proved rugged and able to take a lot of damage and still keep on flying. Operating from primitive bases close to the front lines, ground crews considered the type reliable in field conditions, being easy to maintain." 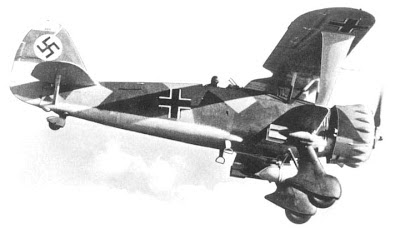 "The combat evaluation of the Hs 123 demonstrated a remarkable resiliency in close-support missions, proving able to absorb a great deal of punishment including direct hits on the airframe and engine."

Under the right circumstances biplanes used by the various combatants during WW2 were EFFECTIVE! The Hs 123, the Gladiator, the Swordfish, the Po-2, etc. Use in a manner to maximize advantages while minimizing disadvantages, AT LEAST during the most early stages of the war!

1) The plane used CLUSTER BOMBS. The "hundreds of light weight scatter bombs flamed and exploded" probably were cluster bombs. This type of bomb was used effectively in the opening months of the invasion of the USSR.

2) The plane could not be built after the war in the USSR commenced as the jigs needed for construction had been destroyed because the planer was thought to have been obsolete. The Germans realized their mistake but it was too late.