From a Russian web site devoted to tanks and Soviet armor from the Second World War [WW2] some descriptions of the "monster" Soviet KV tank in action.

The "monster" TOTALLY ALMOST WITHOUT EXCEPTION TO GERMAN ANTI-TANK WEAPONS OF THE PERIOD, A SHOCK TO THE GERMAN FOR WHICH NO AMELIORATION SEEMED TO BE POSSIBLE, FOR EACH AND EVERY COUNTER-MEASURES TRIED NOT ONE EVEN REMOTELY SUCCEEDING!!

Translations from Russian to English not quite 100 % accurate but good enough, the web site article more or less copied in entirety my feeble attempts as a wordsmith not doing justice!!

"The monster at the road."

1. "On 23-24 June 1941 a single KV-2 of 2nd tank division conducted an armored road block in southern Lithuania (near Rassaynjay town), holding up the German advance. The Germans found themselves in a [lot of] trouble when they lost whole supply truck column. Numerous attacks including a battery of 50mm anti-tank guns (which were destroyed at 500m distance), Flak 88 (the Soviets allowed to mount this gun at 700m distance and then killed it) and an engineer unit attack all failed to silence the Russian tank. Artillery fire of 105mm howitzers achieved a hit to the track and the KV was partially immobilised. This heavy tank at the only road and surrounding swamps made German troops supply (with ammo, fuel and food) and wounded soldiers evacuation impossible. The Germans were forced to use such trick: 50(!) tanks imitated an attack, so it became possible to set another 88mm flak, which managed to eliminate the tank after two days it held up the advance of the entire 6th Panzer Division."

"The Stukas were not used because a commander not allowed an operation 'against one tank'".

"By the Germans' accounts, the crew could have escaped easily several times before the final attack, but the heroes always chooses own fate..." 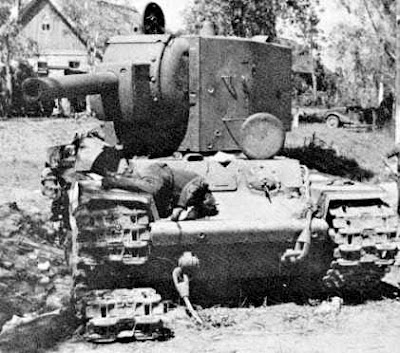 2. "On 18 August 1941, an alone KV-1 (the number 864, the commander was lt.Kolobanov) was dug in and camouflaged near Krasnogvardeysk town (Leningrad area). The tank had an order to defend the road from Kinigsep. Four more KVs were ordered to defense two other roads. All tanks got double ammoloads, 2/3 of rounds were armor piercing. An offensive of 8th German panzer division was expected. Kolobanaov's KV had great hidden position in the woods on the hill, the crossroad located down there between swamps."

"In the next day German motorcycle recon troops, the halftrack and one light track passed by road. Five minutes later the expected big tank column appeared and filled the road. The 1st Soviet round flamed the head tank, after two more shots the 2nd tank was flamed too. Then Kolobanov opened fire on column's tail and flamed the last tank: the Germans were locked. They even couldn't note Soviet tank and opened no-target-fire. Tried to run, some tanks were immobilized in the swamp. The chaos established on the road. Soviet tankers killed 22 German tanks during 30 minutes. Then the KV was spotted by the Germans and they opened aimed fire. In spite of impossibility of German tank guns to penetrate thick KV's armor, knocking rounds made terrible working conditions for Soviet crew. One of German rounds struck the turret ring and the KV was forced to leave its trench and maneuver by whole hull for aim a target. Then the Soviets noted two German towed guns appeared on the crossroad. The first shell disabled one gun, but another gun managed to do one shot and damaged KV's periscope (the loader Kiselkov replaced it nevertheless the enemy fire). Than that gun was destroyed too. Also ammo was almost out, and Kolobanov got congratulations via the radio and an order to go back. Already three another KVs were on the way to the battlefield."

These KV tanks in both cases pre-positioned and taking advantage of the terrain. The German road-bound, swamps blocking maneuver, GERMAN ANTI-TANK WEAPONS INCAPABLE OF DAMAGING THE KV, THE MASSIVE GUN OF THE KV IN CONTRAST ABLE TO RANGE FREE DESTROYING WITH IMPUNITY ALL AND ANY GERMAN THREAT!!

ONLY those troops of the most resolute and determined type, even when equipped with superior equipment are able to hold their ground and fight under such circumstances. In this case, the Soviet soldier was more than able and willing!