"It has withstood the six-repeated desecration by the Muslim invaders. The very existence of this temple is [a] symbol of reconstructive spirit and cultural unity of our society."

From a previous blog entry: "Rana and Headley discussed possible attacks on a number of other sites in India: Somnath, a temple . . . Bollywood . . . the Indian film industry, and Shiv Sena"

Here with info on the Somnath Temple. Allegedly a target for the LeT and having recently been under surveillance by Daood Gilani, the Pakistani-American terrorist spy and agent. Surveillance that was perhaps part and parcel of a forthcoming terrorist raid on the temple itself?

"The Somnath Temple . . . is the most sacred of the twelve Jyotirlings (lingas of light) of the God Shiva." 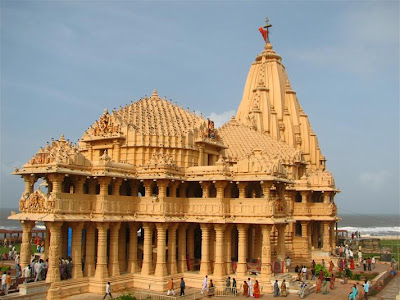 The Somnath Temple. In the background can be seen the Indian Ocean and the Arabian Sea.

"The present temple is the seventh temple reconstructed on the original site. The first temple of Somnath is said to have existed before the beginning of the common era."

The Somnath Temple, one of the most sacred sites in India. An ancient sacred spot, in the Christian tradition only the cathedral at Chartres in France perhaps being comparable.

An attack on the Somnath Temple by the LeT terrorists would have a psychological impact of the most immense proportions. An attack, the intention to only exacerbate in a marked manner the already existing thousand year old enmity between the Muslim and Hindu!!

The temple of Somnath, having great significance to the Hindu, has REPEATEDLY been targeted for destruction by the Muslim invader. With a REPEATED AND WANTON glee and malicious mischief of the highest order the Muslim has sought to destroy one of the most sacred sites in all of India.

* "In 725 Junayad , the Arab governor of Sind, sent his armies to destroy the second temple."

* "In 1296 A.D., the temple was once again destroyed by Sultan Allauddin Khilji's army."

* "In 1701 A.D., the temple was once again destroyed by Mughal Emperor Aurangzeb"

* Please note how close the Somnath Temple is to the ocean. Recall too that Mumbai attackers came by boat. I can easily imagine an attack on the temple by teams of amphibious terrorist raiders, the object to kill as many worshippers and tourists as possible, blow the temple up, etc.

* The current temple has been re-built on the original site, a mosque erected by Aurangzeb having to be demolished first on the exact location. That a temple for poly-theists has arisen where a mosque once stood will be considered an extreme provocation by the Muslim. Recall that a hateful nature is one of the trademarks of modern Islamic terrorism.