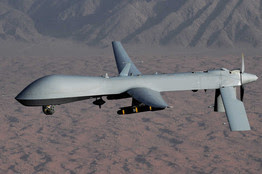 "There was evidence this was not a one-time deal,"

This was a major television news item this evening.

Militants - - terrorists - - combatants in Iraq and Afghan and perhaps elsewhere, have been able to intercept the open and unencrypted video down links as transmitted from various U.S. drone aircraft. See what the pilot and "gunner" firing weapons from the drone sees, in "real-time", what they call it.

It is surprising that this video down link is unencrypted? Anyone possessing the right combination of software, antenna and radio receiver can see what the pilot of the drone sees, and "see" at the same exact moment?

NOT necessarily "hacking" and interfering with the flight of the drone however? NOT "hacking" as intrusion into a computer system or altering the controlling software. "Hacking" as that term is normally understood is not occurring here!

Intercept of this down link is relatively easy to do with some pirated [?] software and a minor amount of technical skill?

"The militants use programs such as SkyGrabber, from Russian company SkySoftware."

Intercept of drone video by unfriendly forces has actually been going on for some time?

"The U.S. government has known about the flaw [unencrypted video down link] since the U.S. campaign in Bosnia in the 1990s"

Shia seems to suggest that the Iranians have a hand in all this? That too!

This problem is being solved as we speak? Encryption of the down links [up links?] for drone video is being implemented right now? Data links used for controlling the drone have been encrypted from the start and for some time now? I hope so!